The following is just a snapshot of Heart of LA Democratic Club activities during the banner election year of 2020. Because of the COVID-19 crisis, most of our engagement was virtual and online.

the Grassroots Election Activities: HLA’s candidates were very successful in their elections last November, outperforming other candidates and in some instances victorious over better-funded incumbents.

HLADems were busy in 2019, our third year! Here’s just a sampling of what we did:

Monthly Club Meetings:
Monthly Heart of LA meetings remain a consistent centerpiece of our membership. In addition to voting on endorsements, meeting face-to-face with old friends and making new ones, we also host guest speakers who cover a variety of topics that our membership expressed interest in knowing more about. Halfway through 2019 we were privileged with the invitation permanently hold our monthly meetings at the Beverly Hills headquarters of The Feminist Majority Foundation, a nonprofit whose stated mission is to advance non-violence and women's power, equality, and economic development.  By the way, our 3-year-old club now has over 250 members!

Events:
Heart of LA Democrats were all over LA County and beyond, hosting and attending political events for candidates, marching in rallies, and raising money and awareness for candidates and causes. Here is just a sample of 2019 events:
Candidate Endorsements:
A big and important part of being a Democratic Club is endorsing and supporting Democratic candidates for office. As a feminist club whose focus is on promoting the full representation of women in local, state and national politics, we have a high bar. In 2019, our club endorsed pro-choice candidates who believe in equality and seek to eliminate discrimination based upon gender and gender identity / expression, real or perceived sexual orientation, race, age, religion and/or disability. We’ll endorse and support more candidates in 2020. Check our website as the list grows!

Phonebanking, Canvassing and Activism:
Any given weeknight or weekend, you can find HLADems members knocking on doors, hosting events, or making phone calls for candidates or issues.
Statements:
So much happened in the news in 2019. It was hard to keep up. But some events were so important and compelling that we decided to release official statements about them. As we look back, our common themes were gun violence, sexual assault, and women’s reproductive rights. We didn’t just make statements though. We gave our members actionable goals to try to make a difference, we made phone calls, and we marched. Here is a sample: 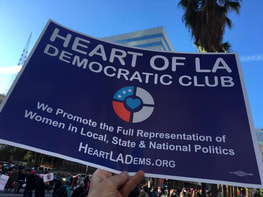 Brief snapshot of Heart of LA’s contributions in 2018:

Heart of LA contributed to the blue wave that took the House back this year
and made history by helping record-breaking numbers of women win a seat in office.

Assessed and endorsed 35+ candidates who represent our values (and most of them won!).

Co-sponsored the Westside Democratic Headquarters, which brought over 2,000 volunteers together
to make 1.9 million calls from June to November knock on thousands of voters’ doors.

Heart of LA helps our members stay informed and active.
Here are a few ways we’ve grown as a  community of change agents:

Promoted feminist values with a formal presence at marches and rallies,
from the Women’s March to the United States of Women.

Strengthened local community through volunteer activities such as the Girls on the Run 5K,
holiday donation drives, and community potlucks with our Muslim neighbors at the IMAN Center. ​