​For Immediate Release  September 12, 2019
Press Contact:  HeartLADemsPR@gmail.com
HEART OF LA DEMOCRATIC CLUB ENDORSES STATE SENATOR HOLLY J. MITCHELL FOR LOS ANGELES COUNTY BOARD OF SUPERVISORS, SECOND DISTRICT
​
The Club voted to endorse at the September 4 membership meeting. The election is set for March 2020, with a potential runoff in November 2020. 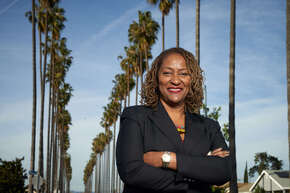 Senator Holly Mitchell
Los Angeles, CA – The Heart of LA Democratic Club (HLADems), a Los Angeles County Democratic club which promotes equality and the full representation of women in local, state and national politics voted to endorse State Senator Holly J. Mitchell for Los Angeles County Board of Supervisors, District 2, at their September 4 membership meeting. The election is set for March 2020, with a potential runoff in November 2020. District 2, with a population of over 2 million people, covers 162 square miles and includes cities from Carson to Culver City. The new supervisor will replace current Supervisor Mark Ridley-Thomas, who will end his service in this office in 2020 due to term limits.

“Throughout her career in the California state legislature and nonprofit sector, Holly Mitchell has used her influence to fight for women and children and to lift up members of vulnerable communities. Her service at the state level, and especially her budget experience, would be an asset to this position,” says Lindsay Carlson, Heart of LA Democratic Club President. “Our board and members are impressed by her championship of criminal justice reform, her advocacy for providing extended access to mental health care services for vulnerable residents, and her advocacy of the inclusion of diverse perspectives within the Democratic Party.”

In addition, Senator Mitchell identified to HLA Dems her three most important things she hopes to accomplish if elected:

1) Creating a more equitable LA County where we significantly lessen the amount of people living below poverty and stem the tide of new residents who are becoming homeless with access to truly affordable housing for all income levels;

2) Improving the physical and mental health outcomes for the Second Supervisorial District which faces disproportionately higher rates of asthma and other health problems than any other district in the county;

3) Strengthening the safety net of services and resources the county provides to businesses, homeowners, immigrants, families and our most vulnerable residents so that we become a national example of how to address our toughest social issues without sacrificing our economy and ingenuity as a county.

Senator Holly Mitchell shared the following statement on receiving this endorsement “The Heart of LA Dems are unapologetic in their fight for equality across our Democratic party and  intentional about uplifting the role women play in furthering our democracy. I am proud to have the support of the fierce advocates that make up this club and to work alongside them in creating a more equitable LA County.”
​
HLA Dems Endorsement committee considered candidates Holly Mitchell, Jan Perry, and Herb Wesson. Each candidate filled out a detailed questionnaire and attended an interview with the endorsement committee, which then made a recommendation to the membership at the Sept. 4 meeting. HLA Dems members agreed with the committee that all three candidates demonstrated a sincere and keen understanding of the Heart of LA Democratic Club’s mission and that each candidate has dedicated their careers to serving communities across Los Angeles. The vote for Holly Mitchell exceeded the club’s 60% threshold.

For more information about Senator Mitchell’s candidacy and to get involved in her campaign
visit www.HollyJMitchell.com